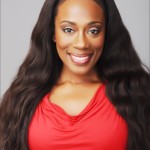 Sometimes in life all you have is a dream. It’s the vision that allows you to see beyond the limits of your everyday surroundings. It’s the faith that forces you to believe in yourself when no one else will. It’s the passion that gives you a clear purpose and mission in life.  Recording Artist , entrepreneur, and all-around entertainment extraordinaire, Tylibah, understands the power of a dream better than most. It is this understanding that fuels the fire, passion, and energy of her music and creative endeavors.

“My music is rooted in the struggle but at the same time it’s very upbeat. Many of the records represent where I am now, where I plan to go, and how I see the world,” says Tylibah.

Born and raised in Brooklyn, NY Tylibah’s music is derived from her experiences and observations as a young woman growing up exposed to the negative and positive in life. In the song, “Thinking of You,” she lyrically pays homage to the streets of Brooklyn that instilled in her the drive to succeed.

“The mass media teaches people that only violence, poverty, and criminality come from the hood. However some of our biggest and most positive superstars come from the hood. So I’m grateful for being a product of Brooklyn because it gave me a great determination to go even further in life.”

It is Tylibah’s drive and passion that has led her to achieve a level of success that rivals that of people twice her age. Already, she has shared the stage with legends such as Maya Angelou, Cicely Tyson, Phylicia Rashad, Avery Brooks and Delroy Lindo, and opened for R&B singer India.Arie, rapper Cam’ron and Wu-Tang Clan; where she spit bars with Raekwon.

Tylibah’s performances have earned her a deserving reputation as a lyrical force to be reckoned with in an industry dominated by males. On the song, “Whatever U Got,” Tylibah serves up a female empowerment anthem to remind men that a woman can do it just as good, if not better. Over a percolating minimalist beat and turntable scratches, Tylibah raps, “Big up to my females who’s doing their thing/Don’t depend on the man for the things that he brings…”

“My mother was a single parent for many years and I saw her struggle to raise kids on her own. She did it with grace, style, and she taught me that if I want something I got to get it myself. It’s important for women to realize to get what they want and to not depend on anyone else to give it to you. As an artist I want to inspire women to be independent and sexy without having to rely on their bodies.”

Tylibah’s commitment to empowering young women and being a leader in the community is evident in the vision of her company, Leebah Baby Productions which is the umbrella company for Leebah Baby Treasures Charity. Founded by Tylibah, the charity uses the arts to educate and inspire children through various arts workshops, motivational speaking, and mentorship programs. For Tylibah, being able to give back is one of the most rewarding aspects of her career.

“Music is the conduit for the higher message and the higher message is to empower people to empower themselves. As a child I was fortunate to have classes on dance, on music, and I found my voice through poetry. I want to pay that forward to the next generation so that they too can find their voice and path in life.”

As if music, giving back, and being a role model were not enough Tylibah is also a self-published author of “Streets in Poem Form: A Compilation of my Thoughts.” The book has sold over 15,000 copies in less than a year and received widespread critical acclaim from sources such as Dr. Cornel West, BET, WBLS, and many more.

For Tylibah, her endeavors in the world of music, publishing, and more are all part of her big dream to inspire others through her creativity. On the catchy lead single, “Y U Mad?” she addresses past, present, and future haters and reminds listeners not to let anyone get in the way of one’s dreams.

“’Y U Mad’ is an anthem for the masses. I’m telling haters to step aside and to allow people to shine. The mission of life is to be ale to achieve your dreams and find your purpose.”

With that said, don’t be mad as Tylibah reaches the pinnacle of her dreams, one amazing step at a time.